We wish all of our customers a happy and blessed new year. Have a look at our new products > click here 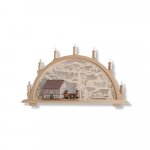 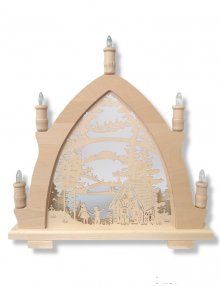 Delivery time: around 5-25 working days depending on the country

This candle arch half-timbered house with miners is lovingly and detailed handcrafted in the family business Lenk & Sohn.

Manufactured with the utmost care and traditionally made from selected woods, this bow is a popular eye-catcher for young and old.

Candle arches have been decorating the living rooms and window sills for many years at Christmas time and conjure up a cozy light that invites you to linger.

This Schwibbogen half-timbered house with miners is decorated with 7 visible candles which are distributed over the entire arch. There is also an electric candle in the rustic half-timbered house which bathes the scene of the arch in a special light. Three quarters of the arch is adorned with motifs neatly cut out of beech wood, a snow-covered winter mountain on which children are tobogganing and a small church at the edge of the forest, we can even catch a glimpse of a mine and watch the miners at work. The main focus of the arc, however, is on the two miners who, in traditional uniforms, push a mine cart full of sparkling ore onto the mine, next to the two there is a rustic half-timbered house which is even illuminated from the inside. The figures made of darker wood form a beautiful contrast to the otherwise rather light arch.

This bow has so many small details in store for the attentive observer that one can hardly get enough of it.

Other beautiful pyramids by Lenk & Sohn and other manufacturers from the Ore Mountains can be found here.

Convenient after receiving the order

With no ifs and buts

within 2 years by manufacturer

PayPal / MasterCard / Visa and many more

Register for Erzgebirgskunst Shop Newsletter and receive product news, campaigns and savings directly to your mailbox!